There are so many different articles about the variety of tobacco, coals, hookahs, but everyone forgot about such a great assistant as a hookah pad.

Previously, there was no alternative to hookah foil as we know it. Then reusable metal mesh with holes began to appear, and then special pads such as Kalaud Lotos, Heat Keaper and their Chinese replicas.

What did the hookah pad change? It made the work madly easier for us, the working hours were reduced by a lot. We don’t work on pulling foil, we don’t make holes, we don’t adjust coals, and we don’t control the heat 24/7.

But there’s one thing, but we’re used to one Kalaud manufacturer.

But I want to compare several varieties of pads and firms

And so let’s go :
1. Kaloud Lotus – It is the very first to appear on the Russian market and is analogous to the original Kaloud Lotus® I+, because the price bites very much – about 3500 rubles

But the Chinese fake has -400r.
Fakes use the lowest quality alloy with increased zinc presence, as it reduces the cost of calaud, but makes it unsafe. A little chemistry: when zinc is burned in the air, a white zinc oxide powder is formed, and when the powder is burned, sulfur is sulfurous gas (we draw conclusions ourselves)

Kalaud is also varnished for shine. Also, after some time, the calaud falls apart In the original versions, they are made of aluminum alloy and polished, but there is one disadvantage – it is not convenient, because Lotus II itself is large and does not fit the standard bowl size. For example, an Upgrade bowl on which this pad does not sit well, so you need to buy a certain bowl for this calaud.
3. Kaloud Alpha is the same lotus, but the manufacturer is Russia

Made of aluminum alloy, the original has a blue rubberized handle, and the fake has a black handle. Also the difference in boxes, the original has white forgery black. In addition, the original calaud will have a stamp “Made in Russia.” Plus, the manufacturer took care of and applied the site to the inside of the calodka 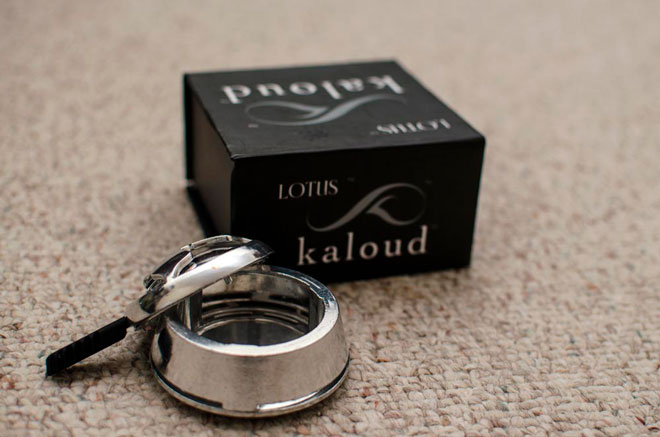 Is an analogue of Kaloud Lotus from MattPear, probably known to everyone in the hookah market. A very interesting calaud – first, the heat supply system – eliminates ashes and sparks from entering the bowl, making it unlikely to be bitter because of this. Secondly, very high-quality materials – even the kalaud handle is made of ebonite, which prevents it from heating up, and makes it convenient to work with it. Manufacturer Russia It’s a cool calaud made of an interesting combination of materials – aluminum, Teflon and stainless steel with a very steep skull pattern with bones on the lid. Due to the use of vintage aluminum rather than Chinese alloy – this calaud warms up faster than a copy of Kaloud Lotus, and is also more convenient to use – has legs that are attached to the bowl and even when the hookah is tilted 45 degrees – the kalaud will remain on the bowl. Overall, the kalaud is very similar to HS Dark Matter, but more interesting in appearance. Manufacturer Russia

Made of aluminum alloy, this calaud is made on the basis of futuristic design Approximate price-500r. Manufacturer China