Could you tell us a few words about yourself, how you started to practice hookahs? 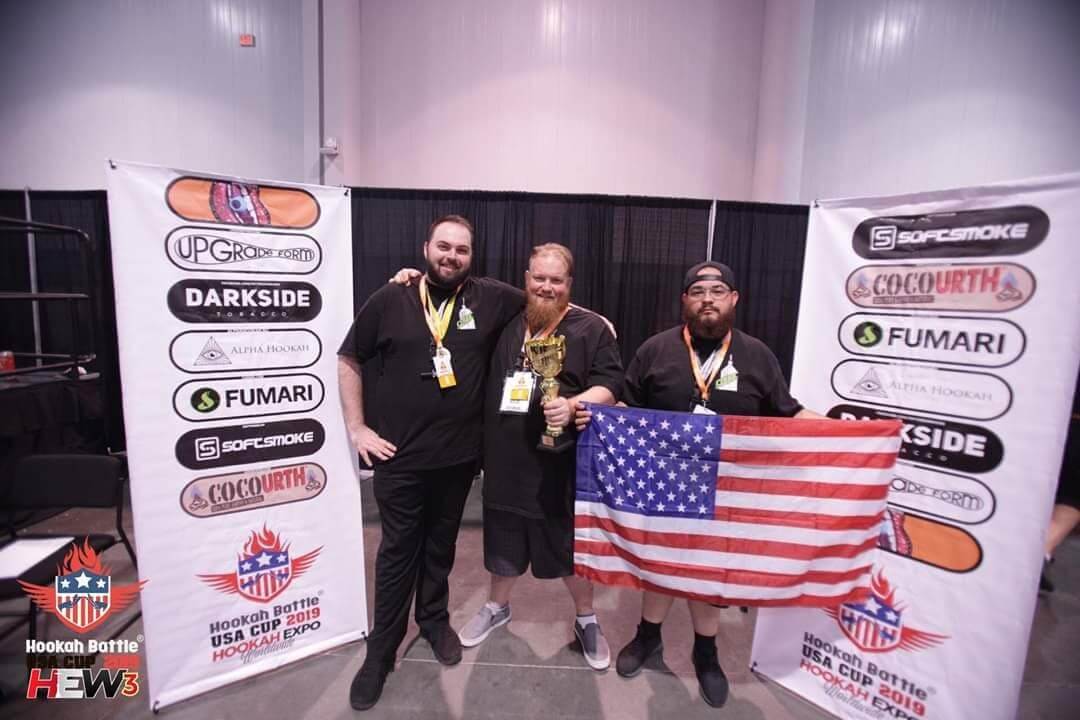 Each of us has a little different of a backstory but we can go over each one a little.
David Harris : I started going to a lounge after a friend wanted to catch up when I moved back to my hometown, we smoked pomegranate, vanilla, mint out of a Khalil Mamoon and an Eggy bowl in 2011. From there it was traveling down the rabbit hole.
Wayne Gonzalez: Well I’m a hookah enthusiast who loves to collect hookah bowls. Ive tired countless tobacco and still will to build great sessions. I started smoking hookah 7 years ago because a friend asked me to try it. So from that day on I touched new brands, new pipes and contained to find ways to better my session.
Jeremy Byrd : Slamming back to 2003 where nothing but nak double apple then moving into mizo and then al fakher. With Syrians, Turkish and km’s where all the rage. Now I have over 20 pipes in my collection from Syrians to Turkish or my Russian mat pear mini, soft smoke or some of my german pipes like my Kinimod or piranha to name you name a few. I have over 200 bowls in my collection from tangiers supercheif and tower bowls to the new farris bowls from HJ and Mason shishaware onxy and helix. I typically keep 15kg of tobacco on hand to smoke with friends and my wife Amanda of almost 15 years. Without whom nothing would be possible. From running a facebook page Hookah University with friends to the show on Hookahuniversity called the beer garden I co-host with David. To creating this wild sword in the stone pipe with David and Wayne for close to 900 hours.

What kind of hookah projects did you have to participate in, where did you work?

David: I have worked on designs for pipes over the last 5 years coming up with concepts only to see the ideas never leave the page, during this time I was working in a variation of different High- End dining establishments, since leaving the establishments I have been working on forming my own brand with in the Hookah Industry!

«The Sword in the Stone» with which you won the World Cup? 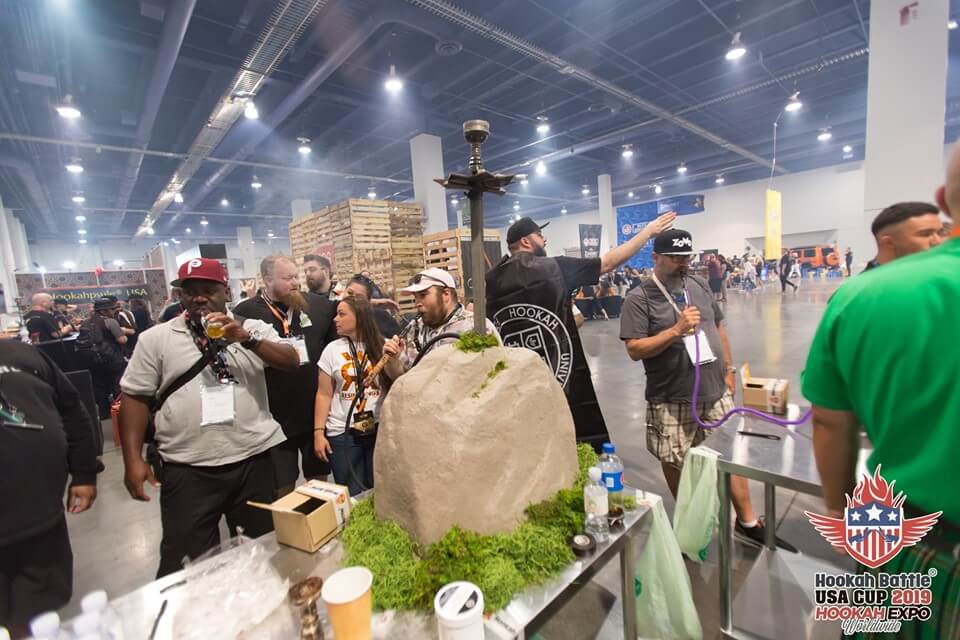 We had a long list of different ideas that we could have focused on, but we sat down and talked one day and looked at possibilities that would differentiate from the rest of the entrees. One of said “Well how about a sword” and then we
kind of all just settled into the idea of the “The Sword in the Stone”.

How does it works? Could you tell us about the details? 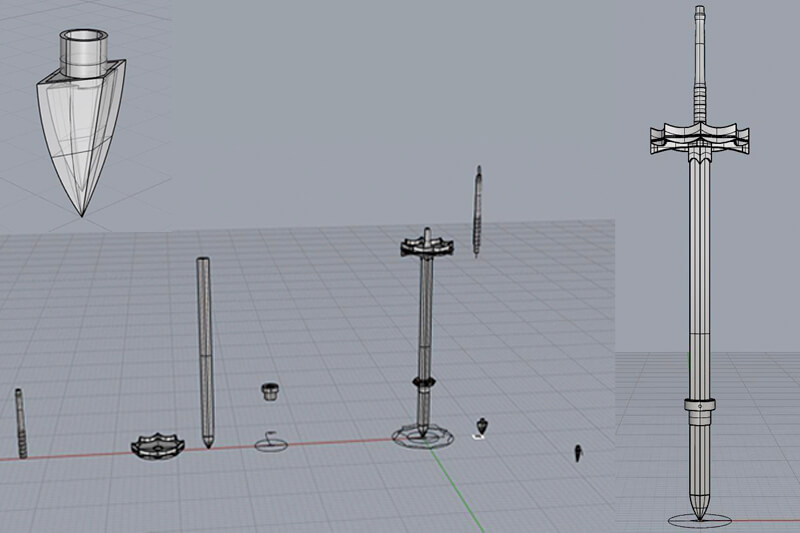 One of the things going into the idea for the sword was making the entire length of the down stem consistent, in other words we didn’t want the theme of the sword to end at the heart of the Pipe, we wanted the design to continue beyond the heart toward the bottom of the stem. The question that arose from that was how we would develop the tip for the sword, as well as the handle to make sure every aspect of the pipe stayed in line with the theme of the pipe. With the sword in the stone we wanted to make a functional piece of art, one where when you weren’t smoking you could have the entire theme on display, with that in mind, we designed an assembly that would allow for the handle of the sword to be the hose handle when you were smoking out of the pipe. The second thing to consider the design was the tip of the sword being a diffuser, something we weren’t entirely sure would work but we were insistent on making sure that we were going to do that.
The last thing in the design process that was essential was developing a heart and base for the pipe, due to the shape of the stem we had to custom design a heart from the ground up, as well as have a base custom made so that the heart would seal correctly. The Heart itself is approximately 250% larger than an average heart on a hookah and the base is about 500% larger volume than a traditional bell base.

How much time did you take to develop a hookah? 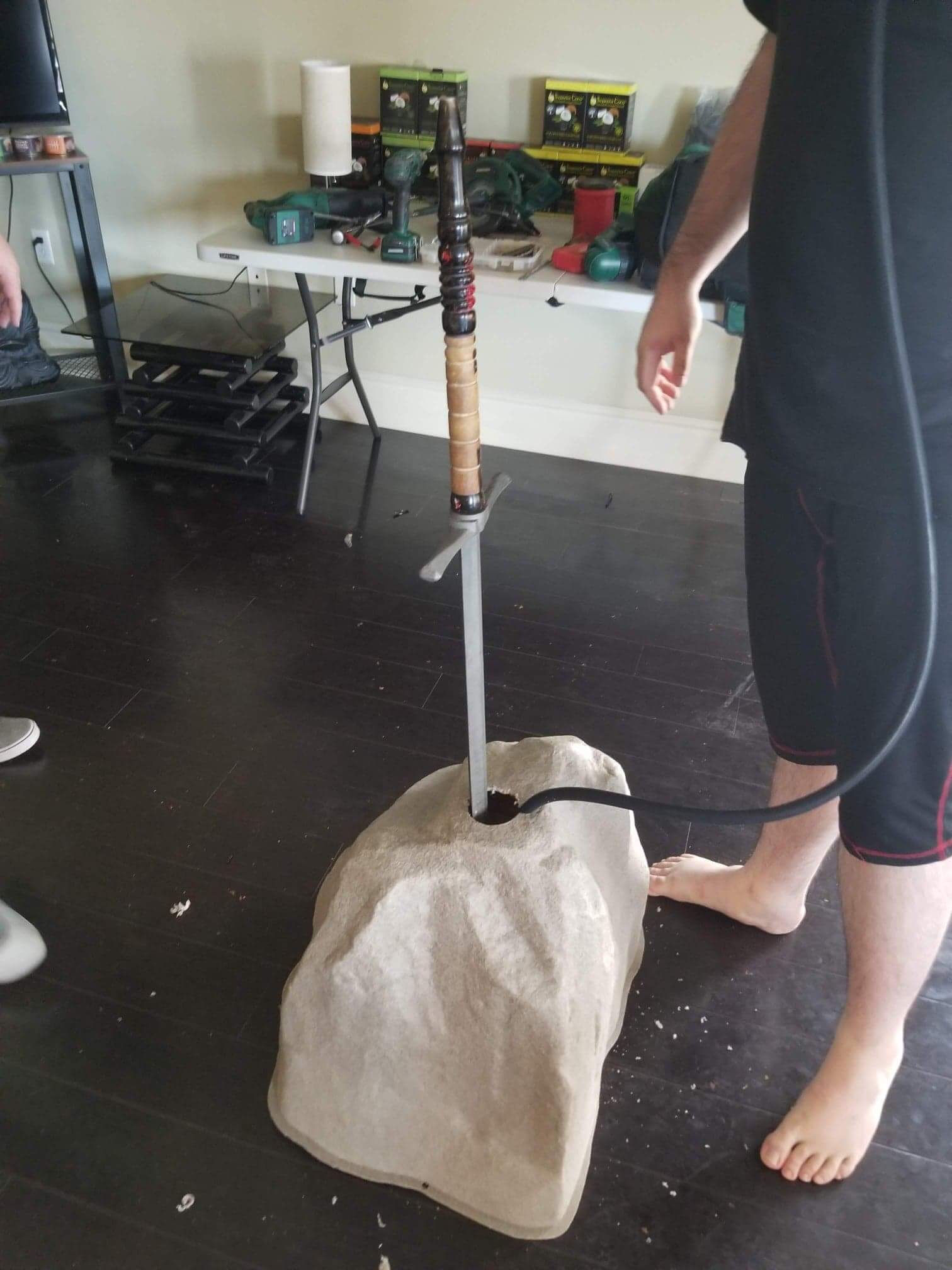 Overall the group agrees that we have over 900+ hours involved in the entire process. The main thing that kept us organized was Computer Automated Drawings to make sure that the specifications of everything we did was designed to make sure every piece would fit together in the proper way. We let people specialize in what they were good at. We didn’t want to assign roles to people if they felt uncomfortable for the task that they had.

What flavour did you packed? What mix, what tastes of which brand did you use in the winning hookah? 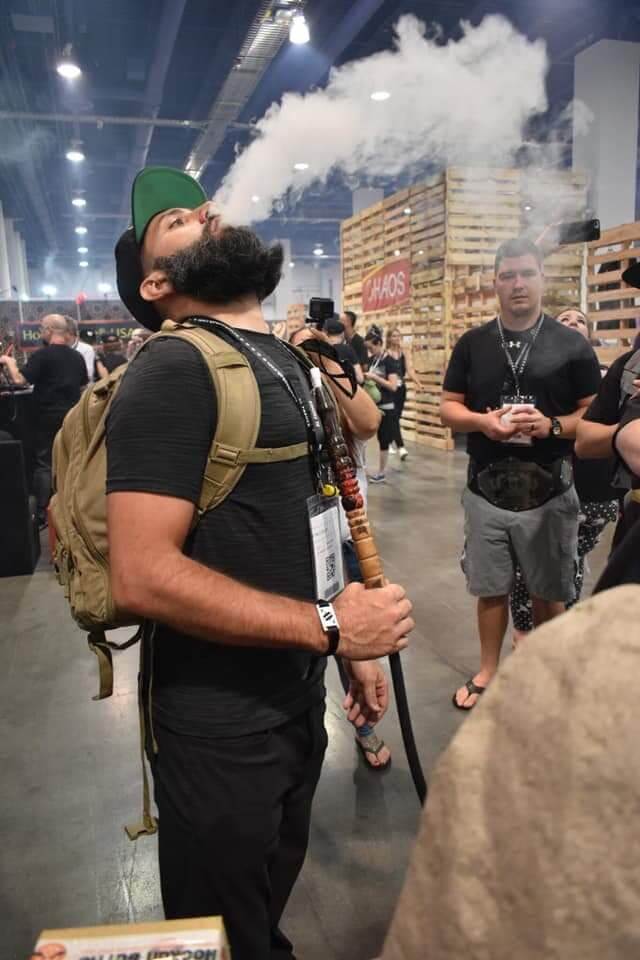 We chose to go with the idea of a Cuba Libre, a traditional cocktail that was served in the early 1900’s inspired by the Hemingway style cocktails of the time. The cocktail normally contains, dark rum, Coca-Cola and lime. Ice wasn’t commonly available which is why lime was used to weaken the taste of the alcohol. We took that idea and decided, we would do an iteration of that, very cocktail. Because rum isn’t a commonly available option for smoking, we chose to use Lime Lit from Eternal Smoke, and Azure Cola. 70/30 mixed and packed in a Stone Bowl with a MIG Razor on top.

How was your experience with this hookah, do you like the work?

We think the sword was an awesome way for the US battles to step it up a level overall, there have been some awesome pipes in the past, as well as some amazing contenders this year but our main goal; 8 months ago was to show up with something that we knew was different than what would show up this year. The sword means a lot to the team and community that we are involved with, the bonds that were formed with Hookah University over the course of the last year really exemplified themselves in the sword. It wasn’t just a victory for our team it was a victory for all our friends and hookah family. One thing we did agree upon is how would we go bigger in the future; we have already started brainstorming for future battles and we want to keep stressing the limitations of what a good pipe can be.

Will you save your hookah? Will it be possible to try it in the future, for example, visiting your place? 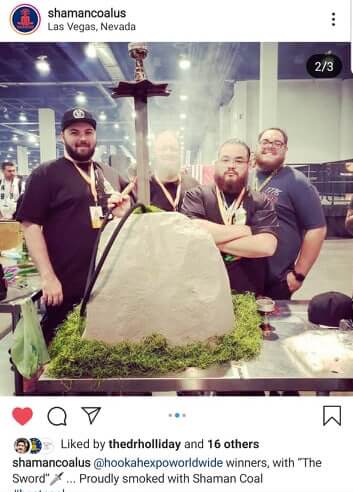 In the rush of events after the battle we accidentally forgot the base somewhere with in the Las Vegas Convention center (whoops) but we did decide that what we may do in the future is solid mount the sword as one piece and use the sword to knight individuals in future hookah events. That doesn’t mean that we won’t try to make a full set up again as an homage to what managed to achieve.

What do you like to smoke at home? What brands do you respect? What kind of hookah do you smoke?

The team all smokes a variation of different product that we can get our hands on, each of us has differing sizes of collections and we always are willing to try the newest flavors possible to integrate them into our sessions.
David Harris: I find myself smoking, Tangiers, Trifecta, and Azure more regularly, when more foreign brands to the U.S, market are available I jump aboard to try as many as possible. At the moment, I smoke 3 pipes regularly, a Regal Melech Pine, a Al Fahker Gen 3. Solid, and a pipe of my own design for testing of my brand.
Wayne Gonzalez 10. Personally I’m am a mint smoker, almost every bowl I pack has mint in it. I respect a lot of brands for bring their own twist to the
market, but my personal favorites are azure, trifecta, and Tangiers. Right now I use my regal queen, my Prometheus and my alpha.
JEREMY BYRD 10. Maaan there it is the personal preference game. Personally mints are where its at for me. From icy menthols like darkside supernova or trifecta Durty mint or sweet peppermints like peppermint shake by trifecta or the newly Released Rio mint from azure. But coming from a dark leaf persepective im finding that there also so really great ICED flavors like lime and watermelon lit from eternal smoke. I also find myself getting into pairing beers with tobacoo’s like a sweet bitter fruited ipa with matching fruit flavors or the like.

How does it feel to become the best hookah masters in United States ? How did your friends feel about winning?

We think that winning the battle is demonstration of the proving grounds we all sit at, everyone has different inputs and levels of knowledge and being able to win the battle is an accomplishment that the time and effort we put in to the Hookah industry in general has been worth it. The judging process is one of the most tedious moments of the battle, you don’t have control anymore and you just must wait for the jury to decide.
Our friends supported us the entire time, we didn’t bring the pipe up much outside of a narrow set of individuals, they always checked to see our progress, they wanted to see this concept become fruition. Our win was their win, plain and simple. 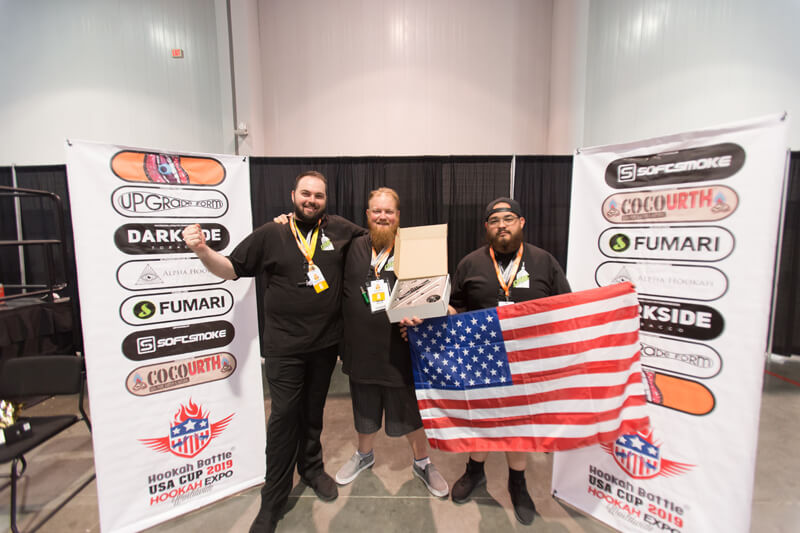 Are you going to participate in foreign battles?

We are looking at the opportunities to go to foreign battles, if time is permitting. We all have our day to day lives that come into play, but we have a special place in our heart for the battle and want to see it and the international industry grow together. Seeing the hookah culture in every country is something that we would like to see and grasp as much as possible. If we want to be a team on the international stage, we need to know what the international stage looks like and where we can carve our names into it.

What would you like to advise to beginner athletes of Hookah Battle?

Be creative, the battle is more than a competition, you see everyone’s concept for design, everyone’s representation of themselves, don’t be afraid to show who are you are through your pipe. Outside of that, be patient a lot can go wrong in the development of any concept, just staying on top of it in a calm manner and addressing everything one at a time will lead you down the road of success. 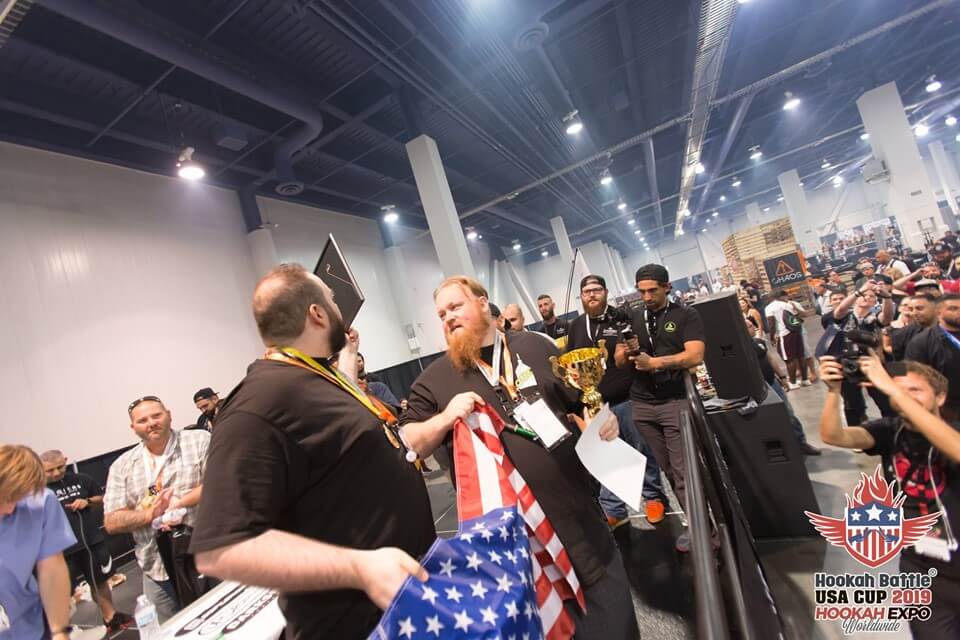